Skip to content
Are You Using NMES Appropriately in the ACL Patient?

NMES with Movement in the ACL patient: Better Than a Quad Set? 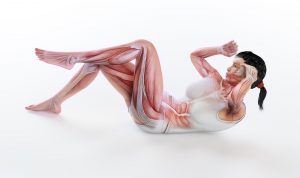 How often do you utilize NMES? For a while we have known the efficacy of NMES on quads strength in various patient populations, ranging from post-operative TKA to ACL patients.  NMES can be a useful tool to allow early recruitment of the quadriceps muscle, especially in those with inhibition. Typically, NMES is utilized while performing quad sets in order to improve contraction and activation. This study , however, looks at NMES superimposed on a sit-to-stand-to-sit (STSTS) movement in the ACL reconstruction patient population to not only improve strength, but to also improve loading through the affected limb as this can be a significant deficit in return to sport criteria.

The inclusion criteria include the following:

The exclusion criteria include the following:

A standard rehabilitation protocol was followed as noted by the outline below:

The following groups were created for the trial (50 total participants): 1) NMES with STSTS movements 2) STSTS movements only 3) No Additional Treatment.    Treatment was carried out 5 days/week from Day 15 – Day 60.

This study suggests improved quadriceps activation, hypertrophy, and lower extremity loading with the use of NMES superimposed on functional movements as another great tool to add to the ACL rehabilitation patient. How often do you, or your clinical instructor, employ NMES in the post-operative patients.

What is the optimal intensity, with the goal of muscle activation, for NMES?

Intensity varies by patient. Intensity should be high enough to produce a  visible muscle contraction.

About the Author: Ashley Theobald

Ashley Theobald, D.P.T. – Ashley was born and raised in a small town in Alabama. She attended the University of South Alabama and was an advanced undergraduate student completing her Bachelor of Science degree in pre-professional health sciences in 2012. She then graduated with her doctorate in physical therapy in 2014. During her first year of PT school she met and married her husband, Ben. They moved to Nashville, TN where she worked for 3 years in an outpatient clinic full time and at Vanderbilt Stallworth Rehabilitation Hospital PRN. She is now working for ATI Physical Therapy full-time in Greenville, SC. She has been an avid health and fitness fan playing softball growing up, tennis in high school, and completing 2 half-marathons in college. She enjoys traveling overseas and has completed 2 short-term medical mission trips for physical therapy in the Dominican Republic (2013) and Haiti (2015), with intentions of returning yearly.